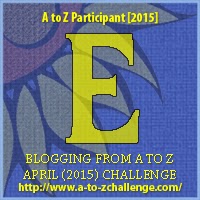 Everything seems like a cop-out.  I think I’m going to have trouble with some of these letters.  Since Easter was yesterday that could also work.  Even though Easter was later in April last year, my daughter was diagnosed the day after so it’s still a reminder that it’s been almost a year. At first it’s easy to assume that she just ate too much candy or something. I have to admit to being a diabetes dummy. It’s was so difficult to comprehend that is was not just a diet problem but a pancreas problem and that there is no easy fix, but ongoing daily battle with insulin essential to survival.  And even though we’ve being doing this for just under a year, it’s still hard to comprehend how EVERYTHING is effected by it and how it changes EVERYTHING in her young life.

A to Z Blogging Challenge

4 thoughts on “E is for Everything”